Bipods have been around for a very long time. Shooters have always sought to have a more stable shooting platform since the dawn of firearms and one of the best ways to accomplish that is still the tried and true bipod. However, not all bipods are created equally, and depending on what you’re doing some bipods may work better than others for any given task. Today we’re going to take a look at some of the best bipods for your rifle that should give you a more versatile and more stable platform to shoot from for your next competition, hunt, or target shooting session.

Shooting Stable: The Best Bipods for Hunting and Shooting 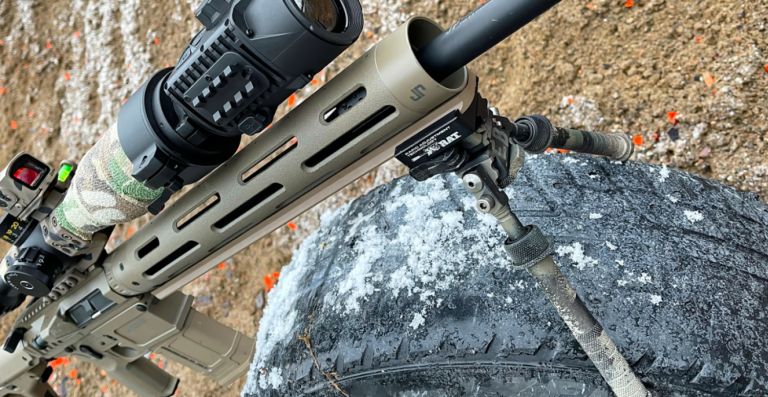 The Harris lineup of bipods is top on this list for one specific reason – they are quite honestly the best bang for your buck if you’re looking for an affordable bipod that can perform in almost any circumstances. The Harris lineup of bipods can be found in nearly any length configuration and all feature rubber feet, spring-loaded folding mechanisms, and a variety of mounting options for any type of rifle on the market. Harris Bipods might not be the fanciest out there but they sure are affordable and kind of hard to go wrong with if you’re just looking for something to widen your variety of shooting positions while out in the field.

Cons/Not the most durable or feature rich

Magpul has a longstanding reputation for providing people with affordable, and super durable aftermarket parts that are also lightweight. The Magpul ARMS Bipod is no exception to this rule and is honestly one of my favorite bipods on the market. The ARMS features a sleek primarily glass-reinforced polymer design as well as a 6000 series aluminum mounting points and stainless steel internals. The Bipod weighs in at less than a pound even with the various mounting options and even features internally spring-tensioned legs that snap into place.

This aluminum and stainless steel constructed bipod from Accu Shot is extremely durable and features very nice construction characteristics. The V8 Atlas features very nice push-button adjustments and can be positioned in 5 different locations to adjust for various levels of uneven terrain and even features up to 30 degrees of cant adjustment for use in leveling out your rifle before an important long-range shot. A highly refined bipod for a discerning shooter.

Similar to the V8 Atlas but featuring a much beefier and angular design, the SR-5-G2 bipod is another highly polished and feature-rich bipod meant for serious hunters, competitors, or military operators. The SR-5-G2 is a 100% American designed and American made bipod and is made from the highest quality aircraft grade aluminum and features 5 different height adjustments, 4-inches of leg adjustments, and the ability to be locked in at 45-degrees of angle to provide you with ha lower profile when shooting from intermediate height objects in the field. The Accu-Tac SR-5-G2 is also compatible with the increasingly popular Arca rail system.

Pros/Extremely versatile and durable – 100% American Made

Last on our list is a bipod that I find to be quite underrated because of its brand name. While UTG isn’t the most expensive or fanciest brand on the market, I do quite like their M-LOK mounted Recon Flex bipod legs. This bipod mounts directly to your M-LOK rail at the 3 and 6-o-clock positions which gives you a greater degree of stability and should keep your rifle level. The Recon bipod can also lock in a rearward or forward position as well as both of the 45-degree angles in either direction and each of the legs features a spring-loaded locking ring for extending the legs.

Cons/Bulky – adds nearly 2-inches to the width of your rifle and weighs over a pound. Also requires an M-LOK rail

I want a military-grade bipod. Which one is issued to the US Military?

The United States Military uses a wide variety of both commercially available and propriety bipods for their small arms. One of the most common within the US Military is the GG&G XDS Bpiod which was selected by the united states army to accompany their precision rifle shooters. These bipods feature flat feet, extreme durability and are about the middle of the road in terms of price costing you about $200. They are a solid option if you can afford them but there are better bipods out there that have better features for a modern competitive shooter.

What kind of bipod is best for hunting?

This is really going to depend on what type of hunting you’re doing. In my opinion, the more versatile your bipod is for your given situation the better. I often like to have the ability to adjust my bipod to very long lengths which can help you make up for the fact that you could be shooting off of a tree, from a prone position, or maybe even out of a tree stand. I would find a bipod that has a lot of range adjustment in the legs and also doesn’t make a lot of noise when being deployed so you don’t prematurely scare away any potential prey.

I don’t know what height of bipod to get – what is the most common?

The most common bipod height will be ones that fall into the 6 to 9-inch category. Most modern bipods are adjustable to within this range but some bipods will be shorter and some will be much longer with some of them extending closet to 20-inches. The six to nine-inch height range is the most common largely because it is ideal from shooting from the prone position and also doesn’t become too unstable with the extensive range of the legs. You will however find that this specific bipod size is very inadequate for shooting up or down steep hills and won’t work very well if you’re hunting in the prararie before all the grass has died off.