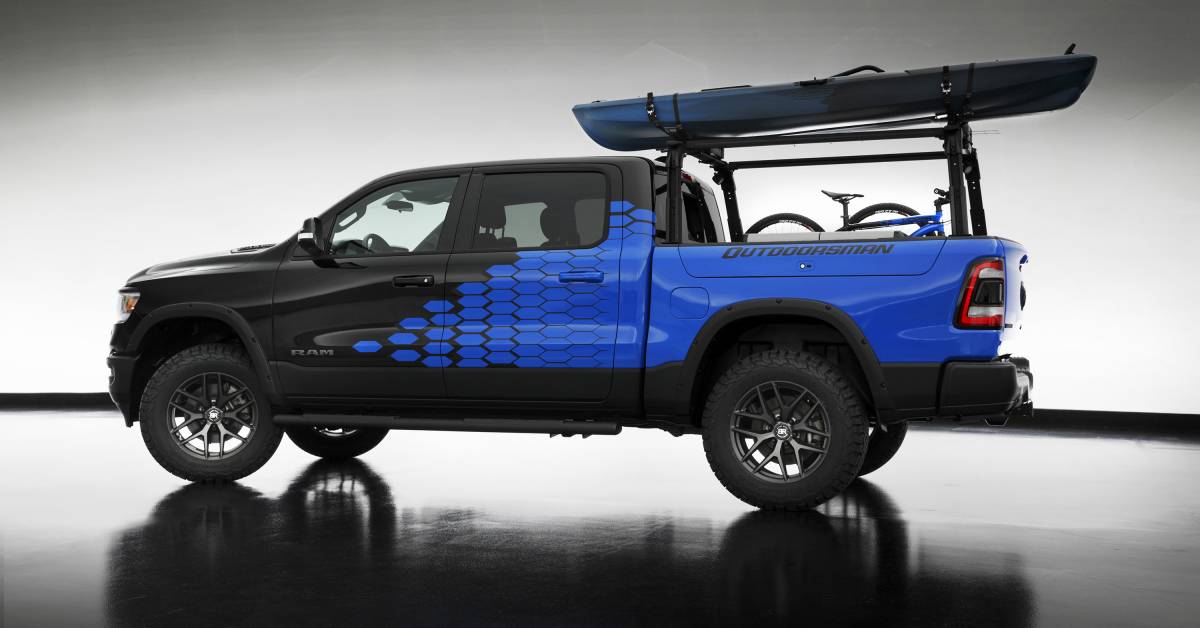 Every year Mopar creates some insanely cool custom vehicles for the annual SEMA Show, and this year is no different. Mopar created seven impressive builds for the 2021 SEMA Show.

You might remember that Mopar teased us with five concept sketches a few weeks ago that we made some predictions about. Well, we got some right and some very wrong. Here are the five vehicles that were teased, as well as two that weren’t expected.

First up is the RAM 1500 Outdoorsman Concept. From the sketches, we thought this might be a TRX build. And while that was wrong, we did get the car camping/adventure truck theme right. This is the 2021 Mopar concept that most resonates with us, as it’s ready for outdoor adventure.

Based on a RAM 1500 Big Horn Crew Cab 4×4 with RamBoxes in the bed, this concept rides on a Mopar 2-inch lift with FOX shocks and 35-inch tires. A custom interior not only looks good but also offers a custom deployable work surface for front seat occupants and a concept RamVac onboard vacuum under the rear seat.

The adventure magic is in the back. The RAM 1500 Outdoorsman concept has a two-height position Mopar bed rack system that is ready to carry supplies to the worksite or kayaks to the river. In the truck bed, an Expertec bed-slide system has dual rolling panels that can each carry up to 2,000 pounds (which would far exceed the GVWR of the truck). The bed-slides are great for securing such gear as a Dometic fridge and mountain bikes.

While the blue accents on this concept lead us to believe it would have some sort of electrified powertrain, we were led astray. The RexRunner concept gets the standard TRX powertrain, with 702 horsepower. This concept is Mopar’s version of the ultimate fully decked-out, desert-runner-style RAM TRX.

The RAM 1500 TRX RexRunner Concept rolls on 37-inch tires and has all the Mopar TRX parts on it, like the RAM Bar, bed-mounted spare-tire carrier, etc.

The custom metal skid plates and fun graphics make this truck stand out from the crowd, but the interior is probably the coolest part of this concept. It combines the sporty luxury of the TRX with the rugged functionality of a RAM Tradesman. From the Tradesman, it gets one-piece molded door panels and a vinyl floor.

We were right about the safari-style top on this concept but didn’t catch that it was actually a three-row stretched Wrangler. The Jeep Wrangler Overlook concept is a four-door Sahara that has been stretched 12 inches in order to accommodate a third row of seats. The custom top is 5 inches taller to create more headroom and offer up those panoramic safari views for all seven passengers.

Of course, this luxury-oriented custom Jeep has a ton of Jeep Performance Parts (JPP) thrown at it as well. Think 2-inch lift, tubular side steps, steel front bumper, new off-road lights, and so on.

A custom rear bumper is a super nice touch, as is the Katzkin leather-wrapped steering wheel and dash. Add in some Sahara Bronze accent stitching, hexed suede seat inserts, and some custom embroidered Jeep logos and you have one sharp-looking interior.

This one is as we suspected, a new Wrangler 4xe hybrid Jeep with the whole Mopar catalog thrown at it. Including some new JPP 5-inch lights, with new A-pillar brackets that work around the plug-in port door on the fender.

Besides a ton of the regular JPP Wrangler parts, this concept also gets specially tuned stuff specific for the 4xe Wrangler. Think 2-inch lift with FOX shocks that allow for 37-inch BFG KM3 tires on JPP beadlock-capable wheels.

The list of mods on this concept is long, with just about every JPP part thrown at it.

We guessed this one kinda right, as Mopar took a 1967 Kaiser Jeep M725 military ambulance and threw their new lights and a few other JPP products at it. But instead of offering new parts for old vehicles, it took an old vehicle and made it new to show off the new parts for new vehicles.

The Kaiser Jeep M725 concept rides on 40-inch tires and has a 485-horsepower 392 HEMI V8 crate motor under the hood. To further its capabilities, the frame was reinforced and the leaf springs were replaced with a heavy-duty link/coil suspension.

Inside this Kaiser concept are low-back Wrangler seats wrapped in canvas. A very cool ammunition box center console helps keep the vintage style in an interior with modern gauges and screens.

In the back, the whole roof pops up. Along with foldout side panels and rear doors, this concept turns into an event vehicle for Mopar.

The teaser sketches didn’t allude to a Grand Cherokee build, but we’re stoked to see this one. This new three-row SUV offers off-road capability and around-town functionality.

The Jeep Grand Cherokee L Breckenridge concept is a lightly modified machine that is mostly a styling exercise. Make no mistake, though — this machine is ready to hit the slopes this winter, with your whole family or a bunch of friends. A Thule roof box on Mopar roof rails will hold the gear while the custom interior will comfortably haul all the people.

To finish off this build, Mopar included a custom set of Jeep-branded Olivet hard-shell luggage and a set of Atmospheric Blue comfort pillows.

What’s not to like about a modern muscle car with classic looks and a fun name? The 2021 Mopar Dodge Challenger Holy Guacamole concept is based on a 2020 Challenger R/T Scat Pack Widebody 50th Anniversary edition. The theme of the build is 1970s throwback.

The build has a custom “Rotten Avocado” paint, “Gold School” Shaker hood scoop, tone-on-tone side stripes, and staggered 20-inch Forgeline wheels on the outside. Inside it gets loads of wood panel trim, green/yellow plaid, and a bunch of other throwback touches to the 1970 Challenger.

A Mopar coil-over suspension lowering kit and Mopar cold-air intake help dial in the performance of this already formidable muscle car. The 392 HEMI V8 under the hood no doubt makes all the right noises in this car.