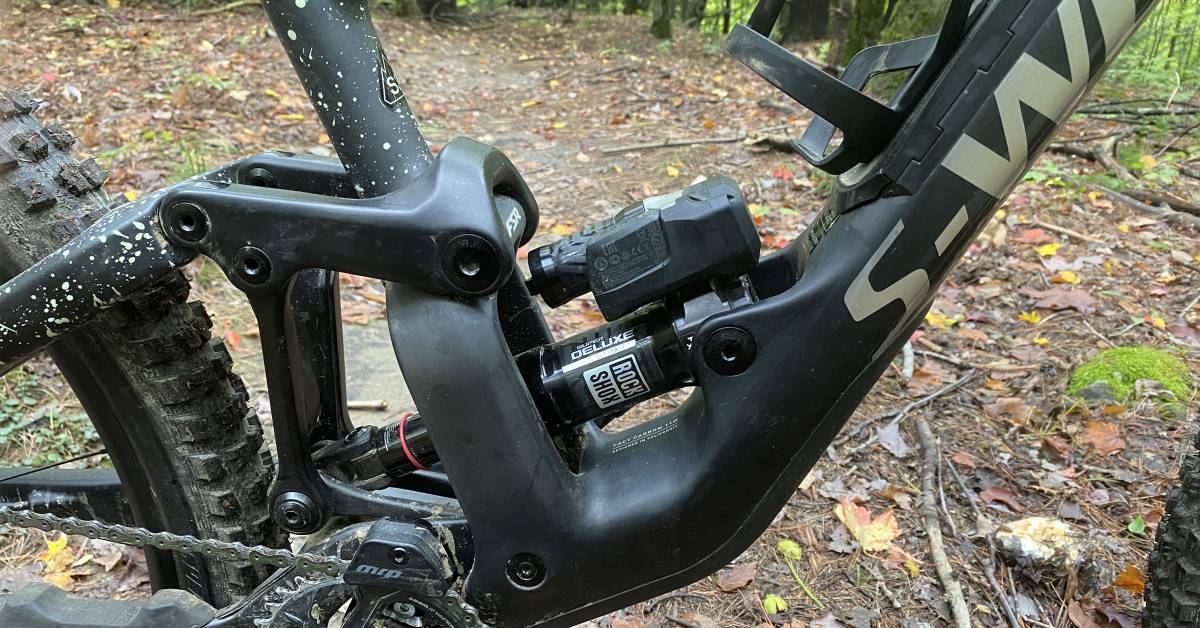 Forget about locking and unlocking your suspension when you ride. Now, Flight Attendant does it for you.

More and more riders are opting for bigger bikes. On a mountain bike, having a lot of suspension can make riding downhill feel like flying. But not every downhill is a straight descent — there can be uphill mixed in. And unless you’re riding lifts or shuttling, at the end of every downhill is an uphill if you want another lap.

The RockShox Flight Attendant — a battery-powered electronic system with sensors on the bike’s shock, fork, and crank — uses algorithms and a miniature motor to adjust your suspension as you ride. The system analyzes the terrain and rider every 5 milliseconds, toggling between “Open,” “Pedal,” and “Lock” modes to suit the terrain.

In the time it takes to blink, Flight Attendant makes about 80 suspension adjustments based on input it gets from the rider and the trail. That should make pedaling faster, more efficient, and more fun. We took some early rides on this new tech to see how it works.

Unlike the Fox Live Valve system, the RockShox Flight Attendant has a pedal sensor that gathers rider data, enabling the system to be predictive rather than reactive. The system moves the shock and fork to ”Open” when it sense rocks, roots, and other bumps in the road. And it adjusts for efficiency when it senses you pedaling.

By putting your suspension in the right position at the right time, Flight Attendant maximizes your forward motion on every pedal stroke, weight shift, and micro-adjustment all while you ride. Plus, it has several modes to choose from via controls on the top of the fork or the SRAM AXS app, where riders have the option to tweak how any mode feels.

And if the battery-powered system runs out of juice, it defaults to open.

For now, Flight Attendant is available on select enduro bikes from Specialized, Trek, Canyon, and YT. Presumably, it will eventually also arise as an aftermarket option. But for now, it comes as part of certain complete new bikes. The sensor “kit” includes rear shock, fork, and pedal componentry.

SRAM won’t comment on the upcharge for the system, as that’s technically up to the manufacturer. It adds around 11 ounces to the weight of a bike depending on spec. That includes the fork, rear shock, and pedal sensors, both SRAM AXS batteries, and the difference in weight between a one- and two- button left controller.

I’ve been riding Flight Attendant on a 2022 Specialized Enduro 170mm front/170mm rear suspension mountain bike for the past 3 weeks. I did a 10-mile ride with close to 3,000 feet of climbing my first day on the bike, and the benefits were noticeable.

With Flight Attendant turned on, the bike felt responsive underneath me and always with enough travel for where I was at any moment on the trail. With the system turned off, I was bouncing all over the place.

I occasionally reached down to lock out my suspension or to put it in the middle mode, but on a rooty, rocky Vermont trail with loads of ups and downs, that wasn’t a perfect solution.

In 10 miles (about 3 hours) of riding that day, multiple park days, and three-times-a-week, multi-hour rides on other networks, there was only one moment where the system didn’t feel perfect. Riding full speed into a dip, the suspension went clunk.

When I pedaled into the dip, I presumably surprised Flight Attendant, and the suspension felt like it bottomed out. That was the only time I thought the system could improve.

Fortunately, the system learns as riders log hours in the saddle. With rider consent, it learns each ride, feeds that data back into a database, and further refines the algorithms that already have thousands of hours of rider input recorded.

Setting up Flight Attendant was simple. After I set my sag and rebound, it took the press of a button to calibrate the system, and I was ready to ride. The next time I got on the bike, Flight Attendant already knew my settings.

SRAM says that the AXS batteries in the fork and shock will last 20-30 hours before requiring a recharge. The AAA lithium battery in the pedal sensor and the CR2032 battery in the controller should last 2,000 hours.

Flight Attendant aims to help mountain bikers ride faster and longer, all with less energy expended by adjusting the suspension for the rider and leaving the rider to focus on enjoying their ride.

The brand nailed it. When I left it all out on the trail, the bike helped me do it more efficiently so I could cover more ground.