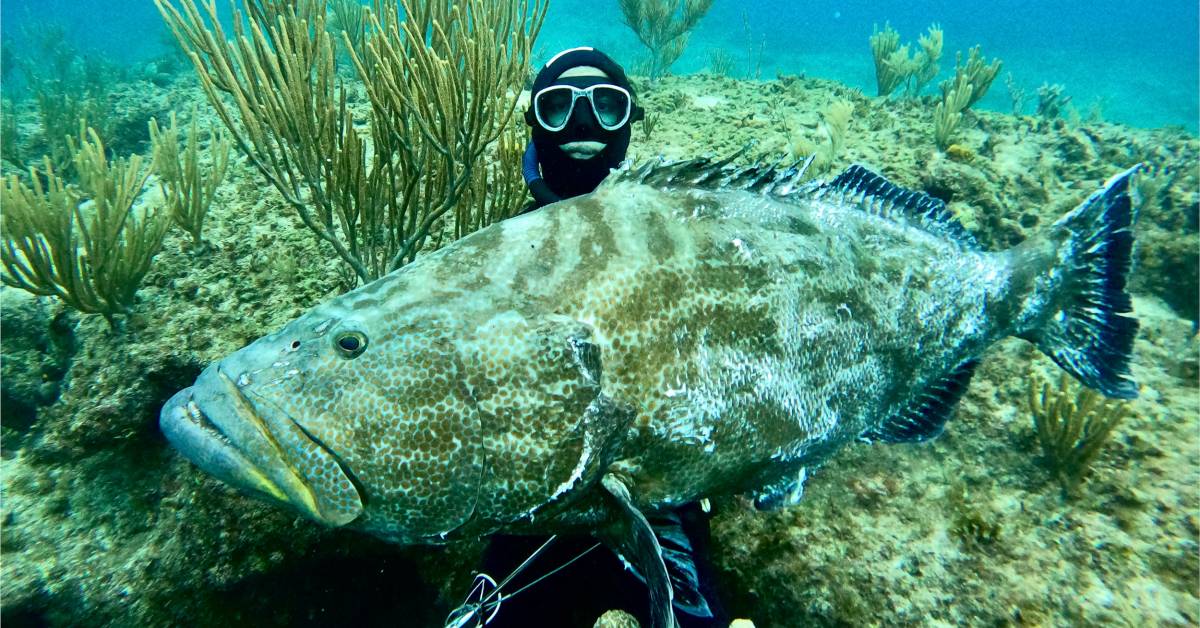 Record spearfisher Cameron Kirkconnell makes his living guiding others to trophy-sized fish. That requires loads of diving gear, electronics, and travel, so he’s well-versed in packing for big trips.

Not everyone packs lead for an international flight, but for a spearfishing guide, it’s just a part of a long and heavy packing list.

As an outfitter, Kirkconnell plans itineraries years in advance, including logistics, training yacht crews, and all the maritime surveillance and photography he’ll need once he’s there. But the end of a successful mission can leave him with only a 20-minute window to pack up and head home.

That means throwing wet and fishy-smelling gear into a bag and onto a private plane. So it had better not leak, smell, or even look ugly.

“I need simplicity, functionality, durability, relatively water-resistant, and aesthetics,” he told us. 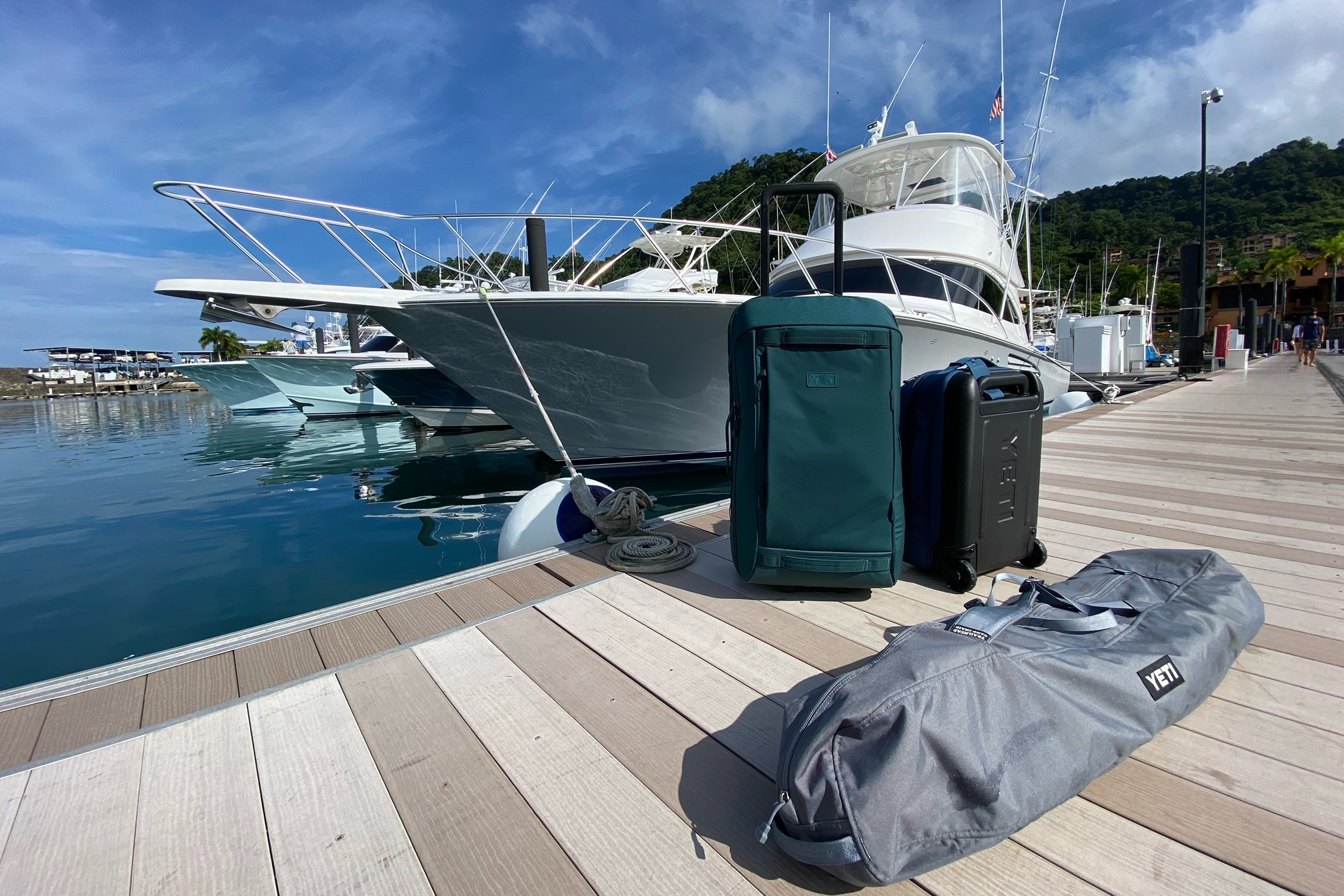 Because of his demanding travel needs, his bags must be strong enough to carry heavy diving gear and equipment, as well as organize and protect more vulnerable electronics and camera equipment. So when he teamed up with YETI, he helped with the design process of the brand’s Crossroads Collection of luggage, duffel bags, and backpacks.

We spoke with Kirkconnell about how he helped see the bags through the design and — more importantly — how he uses them in his travels.

Cameron Kirkconnell: Pack of All Trades

Cameron Kirkconnell emerged from the Merchant Marines with a license to work on ships, which he did for 4 months on and 4 off. In his downtime, he took up surfing and spearfishing, in which he became an expert. And he holds “18 or so” world records.

Now, he’s transformed that passion into a profession as a spearfishing outfitter. With trips booked years in advance, he acts as the captain of the trip and the hunt. He picks out the gear, trains the crew, and has everything in place for when the ideal conditions align.

Kirkconnell has worked with YETI since there were less than a dozen workers in its office. He’s tested out gear before but took a more active, upstream role with the Crossroads Collection.

“The versatility of all of these is pretty clutch. Right now, I’m looking at a stack of bags by the front door — one of them has wetsuits coming out of it and the other one’s got like 50 pounds of lead for taking it to the Bahamas and deep dropping,” Kirkconnell said. “My clientele are people who appreciate the nice things, whether it’s their G5 or 200′ yacht and my gear has to fit the part.”

In developing its Crossroads luggage, YETI sent a mix of its ambassadors to Louisiana. Once there, they were asked their needs and desires for travel luggage and bags.

The group then split into design teams representing different backgrounds and interests. In Kirkconnell’s case, he teamed with a hunter, chef, and bull rider.

Each team then spent part of their day working on bag concepts cobbled together from cardboard and duct tape. And at the trip’s end, they presented their concepts to the rest of the group.

“It didn’t matter what it is we did, we all wanted the same things — just for different reasons,” he said. “We had four groups putting together these ridiculous, amazing ideas, and at the end of all these YETI presented us with what they’d come up with. It’s awesome to have a company that actually listens. We need stuff that works.”

The Crossroads Collection is made to cover full adventure trips. YETI designed it to look clean, sleek, and similar to other luggage — when it starts in the neater conditions of a city airport.

But that’s just Point A of a trip. Point B can be the grassy airstrip and rugged trail en route to a destination, where Point C is the actual locale. And after that, at the target destinations, you can continue to use the luggage for daily trips and excursions. 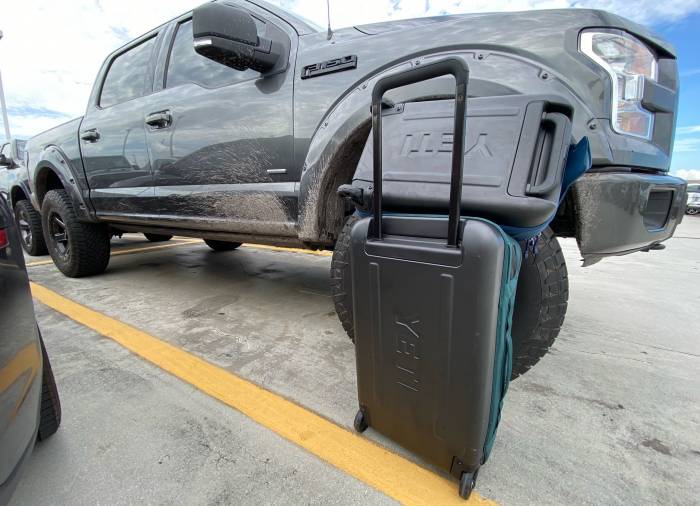 When he traveled on his own, Kirkconnell hauled everything in a triple surfboard bag. One of his big asks from the Crossroads luggage was to build a bag long enough that his spearguns could fit. The majority are 60 inches long, and he has some specifically made to break in half, and the shaft breaks in half as well.

“The days of traveling with oversized luggage for me are over. I can fit everything that I need into this and it can handle it,” he said of his Crossroads setup. “Thank goodness I’m not a pro surfer.”

He also leaves two duffel bags packed all the time. One holds his passport and travel accessories in it. The other stores all his dive electronics. “The one that I thought I’d use the least is the one I use the most.”

Kirkconnell says that packing is such an afterthought because he already knows what he’ll bring. He rapidly lists off his dive gear: “Mask, snorkel, fins, booties, weight belt, gloves, knife, wetsuits, guns, bungees, float lines, reels …” The list goes on.

Though items may vary from trip to trip, Kirkconnell’s packing list to guide a spearfishing excursion looks something like this:

The Crossroads Duffel opens up like a clamshell, and he says it can take the most weight of the smaller bags he’s been using.

“With the Crossroads, everything’s segregated. I’ve got at least one drone, two GoPros, a big underwater housing for a Sony camera. Then I’ve got all my chargers, which are a pain. Then the iPad and then I’ll pack in a bunch of clothes on it so nothing moves.”

He adds, “And the next week I’ll pack in like 60 pounds of lead in it. It’s easy to transition.”

Kirkconnell says broken camera gear is his biggest expense. “I go through two or three broken drones a year. It’s hard enough to land those things, but on a small boat in the middle of the ocean is tough.” He cites the “above and beyond” design ethos of the Crossroads for keeping things safe so far.

For him, a trip to Tahiti will take at least two legs and then a transfer from the international terminal to the domestic. “After traveling for 36 hours, I need something that can roll. Stuff that rolls, integrates with each other, and has big ass tires,” he noted. “The small ones don’t last. The majority of us aren’t rolling just on flat ground.”

His customized spearguns are almost 60 inches long and are specifically made to break in half, with shafts that break in half as well.

“Generally, we’ll dive and fish and do whatever up to the 11th hour and I’ll have 20 minutes to pack my bags to come home. So I’ve got wet wetsuits, gloves that smell like fish, and booties that smell like saltwater for days and you jam all this stuff in your bag that’s going to travel for 24 hours to get home.”

Like a sinker for a fishing line, spearfishers use cigar-shaped weights in a waist belt to hold themselves under. Kirkconnell usually packs a few, with the lead weights starting at 6 pounds and weighing up to 12 pounds.

“There’s just no way you can distribute that weight properly. I did it in that clamshell duffel at first and the rest in my backpack,” Kirkconnell told us. “It was fun watching guys try to load those onto a helicopter.”

This post is sponsored by YETI. Learn more about the Crossroads Collection of luggage, bags, and backpacks.